What These Fear Gifs Taught Me About Faith - Finds.Life.Church

What These Fear Gifs Taught Me About Faith

Sometimes fear can paralyze you or send you running for the hills. But God didn’t give us a spirit of fear and you don’t want to be that guy (or girl). Here’s what I learned a little something about faith and fear from these fear gifs.

Fear is weird. A little fear is a good thing—like, say, when you’re facing down a hungry alligator.

I’m not like this cat! Nooooooo way. I’m running full speed in the opposite direction. That is one fearless cat, and one that is going to end up using up its nine lives a little faster than other cats.

But while a little fear is a good thing, too much fear can paralyze us …

… send us running in the other direction …

… or magnify our fears to make us believe that the small obstacle we’re facing is absolutely terrifying.

There’s a stuffed animal in that box, but this poor guy believes it’s something gross, horrible, or harmful. His blindfold keeps him in the dark, and he believes the worst is in store. If this guy could see what he’s scared of, he’d be really embarrassed.

But that’s what giving into too much fear can do to us. Fear about our relationships, our jobs, or our finances. It can wrap a blindfold around our eyes until we’re living every day scared of what might happen to us.

Something really cool happened to the apostle Peter in Matthew 14. Jesus’ closest followers were hanging out in a boat together when a storm picked up and put them in danger. If you’ve ever driven in heavy rain or been on an airplane when it went through turbulence, you can probably relate to Peter here.

But Jesus wasn’t about to let His disciples down. He walked on the water, over the waves, and met His guys out on the lake. In Matthew 14:27, He let them know it was Him: “Take courage! It is I. Don’t be afraid.” But while some of the other disciples claimed it was a ghost, Peter just needed the word of the Lord. He said, “Lord, if it’s you, tell me to come to you on the water.”

He probably didn’t look as smooth as that cat, but still, Jesus’ presence was all Peter needed to step out of the boat in faith. He was only able to walk a few steps before faltering, but when he cried out, guess who was there to pull him up and calm the storm. Yup, Jesus. And He gives us the same assurance He gave Peter, even when we doubt ourselves like Peter did. Jesus calls us to have the courage to face our fears because He’s there with us in the middle of the storm.

What’s your storm? Where do you need courage? How do you need to start living with much faith?

Don’t let fear turn you into that guy …

Instead, when fear tries to take hold of you, remember who you’ve got calling you out on the waves. And sometimes you just need to laugh at fear.

Turn Fear Into Faith With A Bible Plan 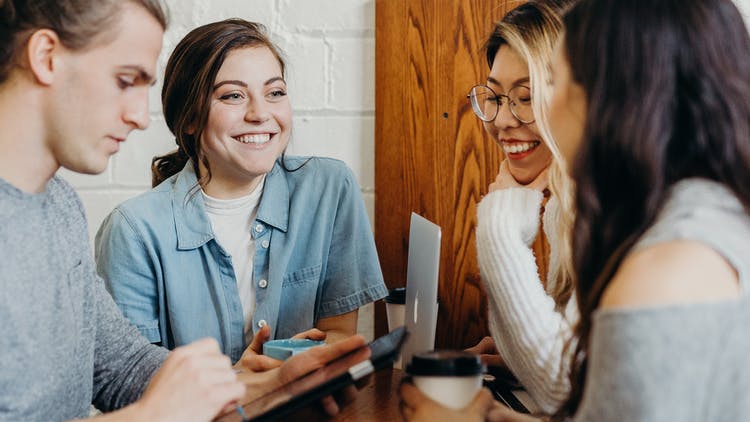 Overcome Your Fear of Commitment With This One Thing