How a Prayer for Family Unity Saved Our Marriage - Finds.Life.Church

How a Prayer for Family Unity Saved Our Marriage

by April and Rockford Todd

April and Rockford Todd got married 11 years ago. They each brought children from their previous marriages. They have five children in total and a story that’ll encourage any blended family. Read this excerpt from the blended family Bible Plan, Blend: Strengthen Your Family, to see how a prayer for family unity strengthened and saved their marriage.

Rockford and I have both been divorced, and we’ve both been through our parents’ divorces. So before we got married, we were sure to sign up for premarital counseling! I thought that’d be enough for what was ahead. I believed we could love each other with a 1 Corinthians 13 kind of love.

Then, we both fought to be the center of the relationship. We continued to cling to the same bad habits and wrong mindsets that led to our first divorces. Have you been there?

Some people refer to blended families as a crockpot because it takes time for all the ingredients to mix and bond. That’s true, but our marriage is, and I think most remarriages are, more like a pressure cooker. Lots of ingredients, under heat, with lots of pressure.

Earlier in our marriage, I would tend to stew (and sometimes still do). Instead of addressing my frustrations, I would just let them simmer inside. I thought that if I said none of the words that came to my mind, I’d have nothing to apologize for. More pressure.

Rockford would tend to spew (and sometimes still does). He often said all of the words that came to mind when he didn’t like something, and he’d just as quickly apologize. I’d feel attacked by the assault of angry words, and Rockford felt held hostage by the icy silence. The pressure built.

Remarriages with kids require the same blending of beliefs and personalities that any marriage does, just with more ingredients, more pressure, and kids that need parenting right away while they grieve what they lost.

And remember God’s command to leave your extended family and cleave, or bond, to your new family? This is just as important to a blended family, but it wasn’t easy for me. My extended family had been there for me through it all, and it felt impossible. But all things are possible with God at the center.

Unfortunately, we had put ourselves at the center of our marriage. The pressure cooker started whistling, and we both knew we couldn’t stop the explosion coming.

God has His own way of diffusing your anxiety and pressure. It starts and ends with prayer.

Thankfully, God has His own way of diffusing your anxiety and pressure. It starts and ends with prayer. How else can we cast our cares, worry, anxiety, and pressure on Him? All things we’ve learned in hindsight, of course.

But it got pretty hard before we put God back at the center and started praying circles around our marriage.

You heard from April about the ingredients in our pressure cooker. The tension had built until it seemed like there was no hope left and an explosion was inevitable. Here’s what happened next.

“The attorney will see you now.” I stood up from my seat and somberly walked back into an office I had been in just a few short years earlier. “I can’t do this anymore,” I said to the divorce attorney in the moment that was almost the end of this story.

I just wasn’t satisfied. Notice the I. My wife, April, and I didn’t see eye to eye. We saw I to I. Raising kids in a blended home was much more difficult than I had realized. I just knew that I wanted to be out of the situation—sooner rather than later. So here I was back at the same attorney’s office from my first divorce.

Maybe we felt like we had nothing to lose, so April and I both opened up about what we were going through. We started talking, but my heart didn’t change, and I didn’t want it to.

Just before I dropped my plans for divorce in her lap, April started reading the book The Circle Maker by Mark Batterson. We kept arguing, and she kept reading. She started doing what the book said. She started praying and walking circles around our home, asking God to do a miracle. People would ask if she was locked out of the house. I had my own questions.

One year on the Fourth of July, my wife asked if I’d go walk the track at the kids’ school with her and the family. I decided rather than walk and talk with her, I’d try to run a mile. At 39 years and nearly 300 pounds, I hadn’t run much of anything lately.

I began to run away from my wife—or so I thought. A mile later something started to change. Over the coming months I started running a lot. So what? I spent more time running that circle, talking to God, and achieving small goals than I ever had in my life. I began to make choices that put God in the center.

Prayer can change your marriage because God can use prayer to change you.

As summer came to an end more than five years ago, our marriage was finally circling around God. Not me. Not April. But God. 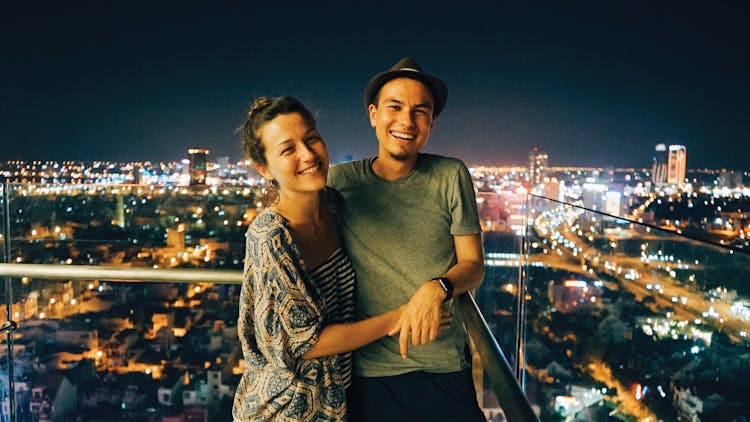 How to Be Grateful for the Marriage You Already Have